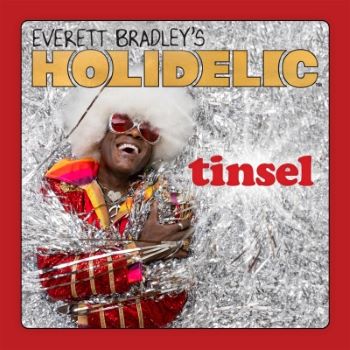 The name EVERETT BRADLEY may not be too familiar to the soul crowd but the rock fraternity will know the percussionist/singer for his work with Bruce Springsteen, Bon Jovi, David Bowie and Cyndi Lauper. In the soul/jazz arena he’s collaborated with Quincy Jones and Bobby McFerrin and has featured on recordings by Hall and Oates.

Intriguingly for the past 20 years, every Christmas he’s staged a special seasonal music extravaganza which he calls ‘Holidelic’. The clue to what it’s all about is in that name! Yep, it’s a George Clinton inspired/influenced funk  revue in which Bradley plays a funky Santa, “Papadelic” – an amalgam of George Clinton and the man in the red suit! After last year’s pandemic closures, Bradley’s ‘Holidelic’ returns this year at the Lucille Lortel Theatre, New York.

You can grab the flavour of the show via Evertt’s latest single -a bassy, funky jam of a tune, ‘Tinsel’. For sure, it’s a Christmas tune but one that’s refreshingly different. Give it a listen. You never know it might just jingle your bells! Out now!