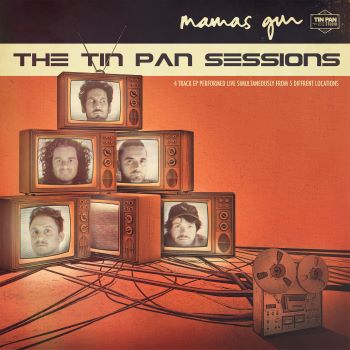 During the various lockdowns brought on by this damned virus, various artists have found various ways to continue to make music and to connect with their fans and followers. Amongst the most inventive have been UK blue eyed soul band, MAMAS GUN. The band have the lockdown honour of being  the first to ever perform and stream a whole concert, absolutely live whilst stationed in separate locations to each other. Armed only with their mics, their instruments, their laptops and some new technology dubbed  ‘TIN PAN STUDIO’, the group performed live from five different locations at the same time and the audio captured during the performances was of such high quality, that four tracks have just been released as ‘THE TIN PAN SESSIONS E P’. (The technology for this, by the way, was developed by the band’s long-standing audio engineer, Doug Hunt).

The four songs on the EP will all be familiar with Mamas Gun fans. They are ‘Pots of Gold’ (which originally appeared on ‘Routes To Riches’), ‘Red Cassette’ (from ‘Cheap Hotel’), ‘I Need A Win’ and ‘This Is The Day’ (both from the band’s last LP, ‘Golden Days’). These four new versions aren’t a million miles away from the familiar originals, but they sound a little fresher and a little more organic; and it’s clear the boys are loving performing all this wonderful material in a “live” setting.

We’re told that work on the band’s next record is well underway and in between lockdown periods the 5 piece have slowly but surely been completing new studio material due for release in 2021. Until then however, during this strangest of times when fans and bands alike are lamenting the pleasures of the live concert experience, Mamas Gun say they hope to bring some sense of this joy back into the picture through ‘The Tin Pan Sessions EP’ which is available now in digital format with two limited edition vinyl 7”s on their way soon.