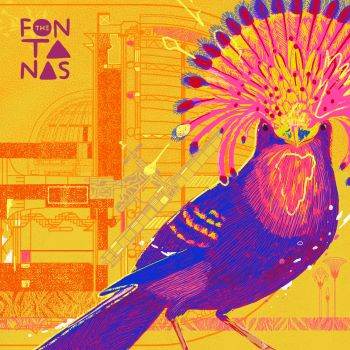 We were introduced to London-based band, THE FONTANAS back in June via their single  – a busy, bustling, brassy builder of a tune, ‘Love Be The Weapon’. We were told that band’s influences ranged from The Dap Kings to Banda Black Rio and those influences could be detected on the cut which featured vocals from Kay Elizabeth.

At the time we were promised an album and the Fontanas are delighted to report that said album, ‘The Luxury Of Time’ is now out via Movimientos Records. The long player is a concise 8 tracker offering similar flavours to that well-received single and a lot more besides.

The core of the Fontanas is made up of global musicians from the UK, Brazil, the US and Jamaica while the guest brass section consists of friends and musicians who play alongside the likes of Incognito, Mr Scruff and Alice Russell. Little wonder that ‘The Luxury Of Time’ proffers plenty of variety. So, ‘Fuel To My Fire’ is a Latin romp, ‘21st Century Fall’ has a reggae flavour and ‘Don’t Give Up’ features steel  drums. The album’s title track is an energized dancer but for something very different try ‘Devil And The Deep Blue Sea’. This is an oddity – built around a sort of vaudeville/music hall atmosphere – think, maybe Madness …but not quite. Like I said , odd. But it adds to the variety of this intriguing collection which is out now.