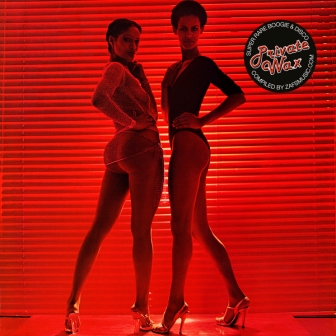 In august Barely Breaking Even Records (bbe) will release a splendid 16 track compilation of super rare disco and boogie music. ‘Private Wax’ (for that is its title) has been put together by renowned crate digger ZAF ZAFSMUSIC who describes himself as “a disco weasel of the highest order”. He says he’s got it bad – losing sleep and suffering physical maladies from the want of certain must-have pieces of stamped vinyl.

He works out of Reckless Records on Berwick Street, London’s hotbed of vinyl commerce and amongst the gems he’s assembled for ‘Private Wax’ is MR. FOX’S deservedly scarce ‘Party Track’ which kinda sums up the mood of the album. Another perfect party track is the offering from SPECIAL TOUCH – ‘This Party’s Just For You’ … a midtempo sureshot if ever there was one . Another goodie is GREGORY JOLLY’S sassy ‘What ‘Em Doing Is My Business’. It nicks its bass line inspiration from JAMES BROWN, and turns it into a slap-happy, southern-fried sizzler. Standout cut though is CHUCK STRONG’S delicious take on the WILLIE HUTCH penned boogie standard made famous by GWEN MCRAE, ‘Doin’ It.’ For disco denizens it’s a must have cut on a must have set.

PRIVATE WAX is out in August  on bbe Records –more info – www.bbemusic.com