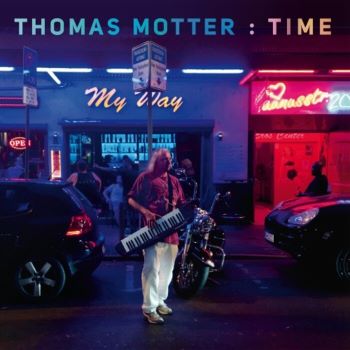 THOMAS MOTTER is one of Germany’s top jazz and soul keyboardists. He’s  a regular session player and he’s also released 5 solo albums – some credited to a band that he dubbed ‘Moonbase’. And that’s a clue to his signature sound . A lot of Thomas’ music is spacey and ethereal but there’s always a soul and funk undertow – more pronounced on his latest album, ‘Time’.

The LP is an epic affair – 17 tracks with a large guest list. You see, 15 of the cuts are vocals, so Herr Motter has used his network and charm to bring in a brigade of guest singers. Soul collectors will be familiar with some of them. Biggest name is Ty Causey. He fronts a tune called ‘New Morning’ -a sweet and gentle affair. Many will know the work of Lenora Jaye too, She helps  Thomas out on the bright opener, ‘Closer 2 U’. Some might be aware of Australian singer Princess Freesia a swell – she fronts the funky, soulful ’In Time’.

The other vocal guests are new to me. Of note are Michelle Bradshaw who offers the dreamy, neo-soul, semi-spoken ‘Don’t Go Very Far’ (she’s also on ‘Not Too Long Ago’) and Jimi Carrow who shows classic soul potential on ‘Loving You Forever’ complete with an old school monologue.