TIME OF THE DAY! 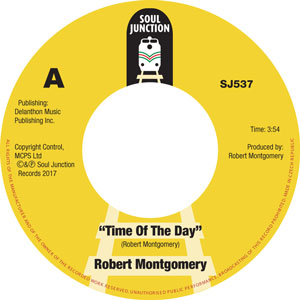 Back in January, UK soul reissue specialists SOUL JUNCTION released a tasty single on ROBERT MONTGOMERY and CHAIN REACTION. The tune, ‘I Need You Girl’, was an in-demand item originally released on Crescent Records in 1976 and fans of the song likened it to Ronnie McNeir’s early material.

After the ’76 release of the song, Robert spent a year touring with a band called Villaruz before eventually pitching up in Atlanta in 1978. There he teamed up with Ripple – remember their ‘The Beat Goes On’? Then, using Ripple musicians, Robert went into the studio and cut four of his own songs, two of which have just surfaced as the A and B sides of a brand new Soul Junction 45.

Top side is a classy modern soul dancer, ‘Time Of The Day’ while the flip is a tougher dancer, ‘Take Me High’. Both win their first official release here.

Back in ’78 Robert Montgomery couldn’t get his songs placed commercially so he quit the business to sell insurance… a job he stuck at, we’re told, for over 30 years, never knowing that his music was quietly becoming collectable in the UK and Europe!