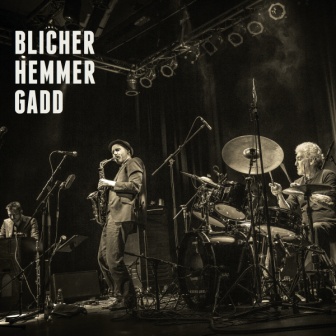 Earlier this year everybody’s favourite session drummer STEVE GADD joined forces with two of Denmark’s top jazz players – MICHAEL BLICHER (sax and flute) and DAN HEMMER (Hammond Organ). The Danish pair are mainstays of a band that goes by the name of Astro Buddha Agogo but for 16 sold out shows Steve, Michael and Dan toured as a trio through Scandinavia and the best music from those shows has just been released on a 9 tracker simply called ‘Blicher Hemmer Gadd’.

With Hemmer’s Hammond out front a lot of the time, the essence of the music is classic soul jazz with the lazy ‘Well I’m Not Really Much Of A Dancer’ best capturing the essential feel of the genre. Other highlights include ‘In A Little Spanish Town’ (the trio’s homage to Lester Young) – on which Gadd indulges himself with an economical drum solo – and a very sombre reading of Yusef Lateef’s ‘Like It Is’. That one’s offered as a  tribute to the jazzer who passed away just a month before recording.

BLICHER HEMMER GADD is out now on C-Nut Records.