THOSE WERE THE DAYS! 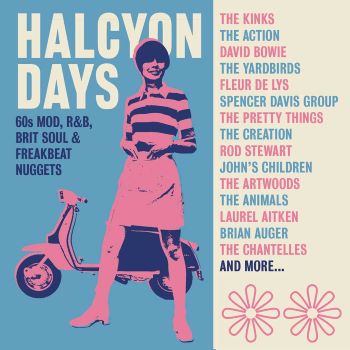 The Strawberry label is a new imprint of Cherry Red Records and follows in the footsteps of the old Cherry Red label, RPM. Collectors will know that RPM was a major player in the reissue of rare and collectable 60s and 70s music across all genres. Their releases were always intriguing, often eclectic, and consistently well curated. Whether it was a compilation, a single artist retrospective or a straight reissue RPM’s output was acclaimed by critics and warmly welcomed by fans and collectors. Little wonder there was more than a little dismay when RPM called it a day!

The good news is that Strawberry is all set to pick up where RPM left off and the new imprint hits the ground running with an ab fab 60s collection …. ‘Halcyon Days’- a three CD, 57 track sweep of UK based mod friendly music – the stuff that was played in the best clubs, collected by the style conscious but neglected in the mainstream… and now, of course, hugely collectable.

The music is presented in a rough chronological order and listening through, you’ll trace the evolution of UK mod musical trends and, by extension, the development of UK pop. Across the collection you can enjoy horn-laden Brit soul, ska and seminal reggae, girl group pop and eventually freakbeat and psychedelia.

The first Cd in the set is the one that will most interest the UK soul crowd. Back in the 60s soul was the mod music of choice, but unlike today, there wasn’t much authentic soul around (especially in the early years of the decade). Not that much US soul was licensed for UK release while visits from US stars were rare. So, it was left to a hard core of home-grown bands and/or Americans residents in the UK to serve up their take on soul. So here on ‘Halcyon Days’ you can hear splendid, enthusiastic versions of things like ‘Just A Little Misunderstanding’, ‘Harlem Shuffle’ and ‘See Saw’ from (respectively) The Richard Kent Style, The Mike Cotton Sound and The Union. Amongst the other UK-based soul artists featured on Cd 1 are Jimmy James and the Vagabonds, Geno Washington and the Ram Jam Band, Chris Farlowe and Zoot Money. There’s even somebody called Rod Stewart offering his version of Sam Cooke’s ‘Shake’.

On Cd 2 the feel of the music becomes a little poppier and a little rockier while on Cd 3 whimsy and psychedelia take over. But there’s still plenty of interest and a plethora of big names – artists like the Spencer Davis Group, the Yardbirds, the Moody Blues – even a young, aspirational David Bowie who offers a freakbeat ‘Do Anything You Say’.

Completing this wonderful collection is a hefty booklet with track by track annotation. It’s crammed full of rare pictures including gig posters, sheet music and band photos. It’s all good to go now!