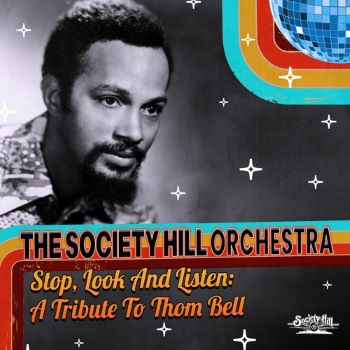 Latest album from BUTCH INGRAM’S Society Hill label – an imprint dedicated to keeping the spirit and memories of the best of Philly music flying high – is a heartfelt tribute to a real Philadelphia giant … THOM BELL.

Bell, born Thomas Randolph Bell in Kingston, Jamaica, has a status in the Philly music world second to none… writing, producing and arranging countless hits and memorable album tracks.

His remarkable career took off via his liaison with the Delfonics where he created a whole new soul vibe which drew on the classic soul group tradition but enhanced with lush and in places classical orchestration. His success with the Delfonics brought him to Philadelphia International where his work with Gamble and Huff is the stuff legends are made of. Independent productions followed – most notably with the Stylistics and the Spinners, whose career he totally revitalized.

For this tribute, Butch Ingram and his Society Hill Orchestra have recorded new versions of a dozen songs associated with Bell – either as writer, producer and arranger and they are delivered in fine style by the band which is fronted by sax man Benny Barksdale, Jr. The vocals come from a team of up and coming Philly singers like Ter-Ree, Jimi Williams, Jimmy Lee, Kat Fontaine and  Saleem. Between them they offer new insights into the tunes – and they don’t  always stick to the original arrangements. Some of the tracks are led by Barksdale’s sax with minimal vocal input, but all are offered with love and respect.

Some of the tracks are obvious choices… ‘Stop, Look, Listen’, ‘People Make The World Go Round’ and ‘La La Means I Love You’ for instance; others are less obvious. So here you can enjoy a versions of things like ‘It’s Gonna Take A Miracle’ (a hit for the Royalettes and later Deneice Wiliams – Bell produced her version), ‘I Just Don’t Wanna Be Lonely’ (Bell produced Ronnie Dyson’s original version) and Phyllis Hyman’s ‘Old Friend’ (another Bell production). The oddity and the only one I don’t know of a Bell link is the inclusion of ‘Armed and Extremely Dangerous’. It doesn’t really matter though. This new version is as a spirited as the other 11 tracks.

The Society Hill Orchestra – Stop, Look And Listen: A Tribute To Thom Bell – out now