THIS IS THE MOMENT …. 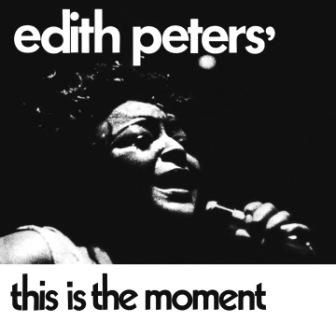 EDITH PETERS, who died in 2000, was an American singer and actress. Born in Santa Monica, California, she sang solo, in a duo with sister Joyce and with all her sisters in the Peters Sisters. Edith and her siblings enjoyed limited success and in 1958 she married her Italian agent Silvio Catalano, and moved to Italy where she appeared in movies, commercials and TV dramas.

In Italy, in 1973 she cut some sides with producer Sante Palumbo and a single ‘Lord Please Hear My Prayer’/ ‘This Is the Moment’ was released on Cipiti Records. It meant little; but over time the rolling, gospel-infused, sparse, funk workout that was ‘This Is The Moment’ became highly collectable.

Now, some forty years on, ‘This Is The Moment’ has won reissue as a 7″ single on Italy’s Schema Records. The new reissue features the original 1973 recording alongside a reworking from celebrated Italian muso Gerardo Frisina (remember his re-tooling of Gregory Porter’s ‘1960 What’?)