THIS IS THE MODERN WORLD! 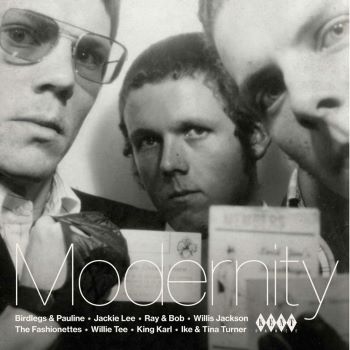 Latest compilation from Ace/Kent is one in their occasional series where the compilers select a set of songs that would have appealed to hard core, first generation mods …tunes that would have gotten the various mohair Sams and Sals  dancing round their preferred cellar clubs. Thing is, though, that most of the cuts amongst the generous 24 were never released in the UK in the 60s so jerking, twining and monkey timing to ‘em back then would have been impossible! No matter, old mods never die, so with ‘MODERNITY’ they can turn back the years  and bop to their hearts (and souls) content – arthritic limbs permitting!

The sound across ‘Modernity’ is the sound of popular US black music in the early/mid 60s. So, think mostly of sounds that are on the cusp of authentic R&B and embryonic soul – like Ray Charles’ classics ‘Hit The Road Jack’ or ‘Get On The Right Track Baby’.  Don’t, though, expect names as big as Uncle Ray on this collection. Biggest “names” here are possibly Chuck Jackson who offers the big, dramatic ballad ‘Lonely Am I’ and Ike and Tina Turner whose tune is ‘Walk Home With Me’.  Proper soul fans will also recognize the names of Willie Tee, Eddie Bo and the effervescent Jackie Lee whose cut is ‘The Bounce’ – a classic early Northern side; a classic  vibe-featuring Mirwood stomper. Equally “Northern” but less known is the Fashionettes’ ‘Earthquake.

Eddie Kirk’s ‘The Hawg’ shows the bluesier side of mod music while the Birds Of Paradise’s ‘Bossa Blue Port’ is classic soul jazz but for a real left field instrumental try ‘Soul Grabber’ from Willis Jackson – the ‘Batman Theme’ meets ‘Sock It To ‘Em JB’ . Yep, there’s plenty here to keep not just mods but all real black music lovers happy and intrigued.

MODERNITY is out now on Kent.