THIS IS THE MODERN WORLD…. 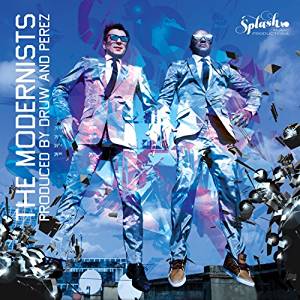 ‘The Modernists’ is the latest musical project from DRUW (Andrew Richardson) and PEREZ (Billy Reid). Hailing from London, they are probably best known as the brains behind Don E’s hit ‘Bonafide’ . Druw has also worked with people like Noel McKoy, Kele Le Roc, Donna Gardier, and Allison David while under his “Sunwalker” alias he’s enjoyed some success with his long player, ‘Energize’. Perez is an in-demand DJ whose club nights at the Soul House in Farringdon have featured appearances from artists like Jocelyn Brown, the Reel People and Shaun Escoffery. After a chance meeting at the Notting Hill Arts club, Andrew and Billy realized that they shared the same musical vision… getting people out on the floor by “stimulating both the mind and the legs!”

The first fruit of their alliance was that aforementioned Don E cut but now they’ve just unleashed a full album, ‘The Modernists’. Given their mission statement, no surprise that the 13 tracker is a full on call to the floor and , equally no surprises, helping them flesh out their ideas is a A list of UK soul names….Omar, Elisha Laverne, Noel McKoy, Don E and Allison David amongst them.

Grab the flavour of the music from the opening title cut. ‘The Modernists’ features pounding beats, electronic instrumentation and a big, big vocal from Elisha Laverne. That recipe (with subtle differences and varied voices, of course) is repeated throughout the set. Another immediate grabber is ‘WOAH’ . This one is a tad more percussive and rides a Latin undertow over which the very unique tones of Omar float in a laid back jazzy way.

Elsewhere, the Elesha Moses-vocalised ‘Reach Out’ is wild and frantic despite a deceptive string-driven intro. Then there’s the more adventurous ‘Truth Hurts’. It’s the most experimental and exotic cut with a peculiar European flavour and a strong vocal from Earl 16. At the moment our fave is the soulful ‘Rising Up’. Great bass line here while the beats might interest the modern soul crew and it’s Ms. Moses on vocals again.