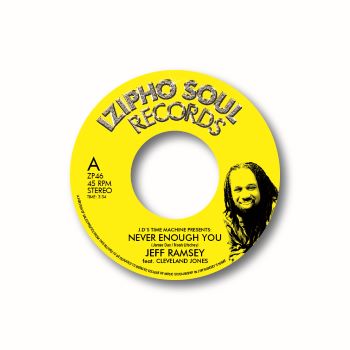 US soul singer and educator JEFF RAMSEY died way too young in February 2020. . A graduate of the famous Berklee College of Music, Jeff  worked with such artists as Lalah Hathaway, Al Jarreau, Patrice Rushen, Maxwell, Celine Dion, Whitney Houston, Diana Ross, and Barbara Streisand. He recorded solo sporadically but his voice was well known in the US via TV and film commercials.

Jeff also worked with producer/facilitator James Day and it’s a couple of JD collaborations that Izipho Records have chosen for a special 7” vinyl homage to Jeff.  The putative A side is a big, brash production ‘Never Enough You’ which also features the gospel-reared tones of Cleveland P Jones. The flip is a subtler ‘Hope’s Up’ on which Ramsey proves that he could’ve been a contender. Both tracks might just remind you a little of dear old Luther but with a tougher edge.

The disc is credited as ‘J.D’s Time Machine presents…’ and it’s a great tribute to a soul man who was “gone too soon”.