THERE’S A BUZZ ABOUT…. 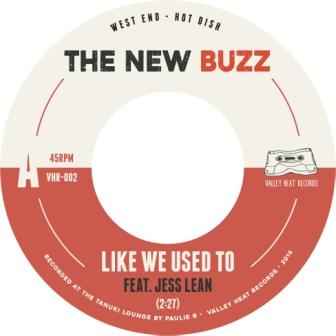 THE NEW BUZZ are a 6 piece soul band from Brisbane, Australia. The collective are collectively Jess Lean (guest vocals),Joel Alexander, Paul Watson, Paul Bromley, Grim Tilla, Peter Golikov and Michael Sanjay Jude who also play in bands like Bullhorn, Dubmarine, Bobby Alu & The Palm Royale, Laneous & The Family Yah and Golden Sound. The New Buzz work in an unusual way. It seems that the band basically heads in to the studio whenever it works out that all members are in town at the same time. They then write and record (usually in one pass) their new song and that’s it till they meet again.

Despite that odd routine, the band have almost finished an album and are currently promoting the two lead cuts. ‘Like We Used To’ is a fast dancer with an almost Northern flavour. I say “almost” ‘cos the wild rock guitar takes it somewhere else. Vocal by the way is from Jess Lean. ‘Silver Linings’ is quite different – a tight, funk instrumental that was recorded on an old second hand tape deck. Sadly, for me, that rock guitar (again) just spoils the mood.

The two tracks form the A and B sides of a limited edition vinyl 7″ that’s available via PledgeMusic and the band are offering all kinds of extras with a purchase.