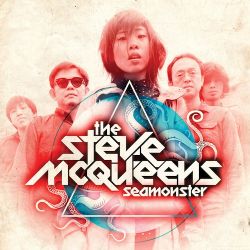 ‘Seamonster’ is the title of an album by Asian band THE STEVE McQUEENS. It’s an odd and eclectic collection of jazz and neo-soul that’s currently being championed by no less a music authority than Jean Paul Maunick…. Bluey, to you and me.

Bluey caught them on a trip to Singapore and was immediately smitten, especially by the persona of lead singer Ginny Bloop. He invited them over to his Shoreditch studio and the result is the album ‘Seamonster’. The ten tracker has just been released on Bluey’s Splash Blue Records and interestingly it’s a far cry from anything that Bluey has created with either Incognito or on his own solo sets.

Musically the Steve McQueens plough an eclectic furrow… it’s a kind of fusion of laid back jazz and neo-soul, but that doesn’t quite do it justice. In places (as on the title track, complete with bucolic sound effects) Ms Bloop might sound a little like Minnie Riperton, but elsewhere her vague delivery might remind you of Erykah Badu….Bjork even. Instrumentally things are skitterey and rambling… shades of sax man John Klemmer with perhaps, ‘You Bring Me Up’ being the most accessible cut,

Of the band Bluey says: “The Steve McQueens, an unusual bunch, like animated characters from a comic book thrust together from opposite worlds. If you gravitate toward the eclectic and you get your kicks from listening to the bold new waves of Hiatus Kaiyote and Snarky Puppy, if you like the virtuosic percussive technique of Chris “Daddy” Dave, your sonic delights topped up with a sprinkle of Fender Rhodes, If you mix your smooth with the jaggedly edgy, then you will most likely dig The Steve McQueens.”

SEAMONSTER by the Steve McQueens is out now on Splash Blue Records.