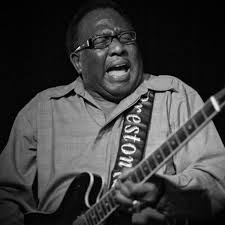 PRESTON SHANNON is a proper old school soul and blues man. Born in rural Mississippi, he moved to Memphis as a child and in the 70s he immersed himself in the city’s musical culture finally landing a job touring in a band that supported Shirley Brown.

In 1991 Preston signed with Rounder Records for whom he released three albums – two of which were produced by Willie Mitchell and recorded in the iconic Royal Studios. Musically Mr Shannon’s sound was a mix of blues and southern soul – a vein he continued to mine after a move to Title Tunes in 2006 and best manifested on his album ‘Be With Me Tonight’.

Preston’s most recent album is called ‘Dust My Broom’ which was recorded for the Dutch label Continental and from that long player, specialist label Soul Junction have lifted the carefree, groove-laden ‘The Way I Love You’ for release as a vinyl 45. Backed by the fabulously-named Fat Harry and the Fizzy Licks, Preston delivers a sound that many soul lovers fear has been lost. Not so, this tune is rough and rustic but full of energy, optimism and, yes, soul… check the great sax break too!

The B side is the more subtle ‘Be With Me Tonight’ – the title cut from the aforementioned Title Tunes album. This one’s a lazy, soul roller that recalls the best of Malaco, the best of Tyrone Davis and the best of Johnnie Taylor… an understated gem.