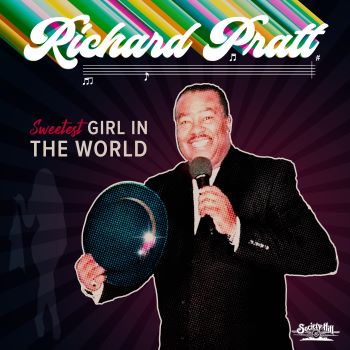 Earlier his month we reported the passing of the bass singer with BLUE MAGIC, RICHARD PRATT. Blue Magic, of course,  were flag bearers for the classic Philly ballad sound and Richard was one of the founding members. After the hits dried up, the band disintegrated but over time various Blue Magic line ups appeared to work the oldies circuit. Pratt formed his own version – Richard Pratt’s Blue Magic; then  in 2018, the surviving members  buried  the hatchet to get together again for a TV show but a suggested  full, permanent  reunion never materialized.

The various member went their own ways again  and Richard Pratt eventually got himself a deal with Philadelphia’s Society Hill Records. Richard hooked up Butch Ingram to write and record a song, ‘Sweetest Girl In The World’, which, with poignant timing, has just been released. In truth, this ‘Sweetest Girl In The World’ doesn’t match the quality of Blue Magic’s material but even though it’s a little rough round the edges, it oozes nostalgia and Richard’s world-weary voice sort of carries the day. Out now!