THE SOUNDS TELL ALL…. 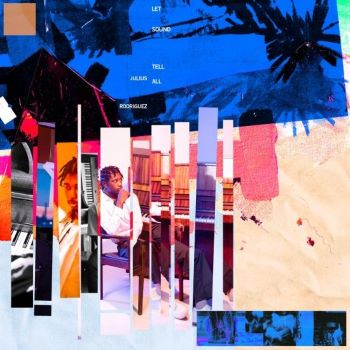 JULIUS RODRIGUEZ is a young NY-based pianist, drummer and producer and he’s just released his debut album, ‘Let Sound Tell All’ via the famed Verve Records.  He began learning piano at an early age and for a time studied at the famed Juilliard School before dropping out to pursue his adventurous musical ideas – fusing the avant garde with classic jazz and hip hop – oh, and he’s also an avowed fan of the Beatles and their inventive producer George Martin.

Listen up to ‘Gift To The Moon’ on ‘Let Sound Tell All’ and you might just hear elements of ‘Sgt Pepper’ in the way the music is put together. On that one (and indeed throughout the short (just 35 minutes long) album you’ll submerge in multi-tracked solos, post-production effects and backing vocals layered to sound like ethereal choirs.

From a soul perspective, the set’s outstanding offering is a lithe cover of Stevie Wonder’s ever-lovely ‘All I Do’ with convincing vocal from Mariah Cameron.