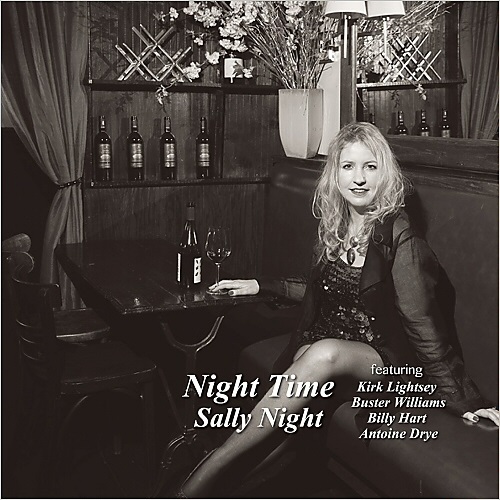 Rising British jazz singer, SALLY NIGHT, has just released a new album (her seventh) on Japanese label, Venus. Titled ‘Night Time‘ it finds the Gloucestershire-born chanteuse – who now lives in New York and is a familiar figure on the Big Apple jazz scene – teaming up with veritable jazz legends Kirk Lightsey (piano), Buster Williams (bass) and drummer Billy Hart. Those three musicians’ combined credits include stints playing with the greatest names in jazz – Miles Davis, Dexter Gordon, Chet Baker, Blue Mitchell, Herbie Hancock, Stan Getz, Art Blakey, the Crusaders, and singers Shirley Horn and Nancy Wilson. Those guys know talent when they hear it and are unanimous in their acclaim of Sally’s musical gifts. “Sally is making her mark as one of the most beautiful voices on the scene today,” enthuses Buster Williams while Billy Hart describes her as a “very inspiring vocalist.” Kirk Lightsey is equally effusive in his praise: “magical, elegant, sultry, and musical,” he says. His piano accompaniment is impeccable on Sally’s fourteen song set which was recorded in New York and features a mixture of standards and a couple of original tunes. Antoine Drye also guests on trumpet.

‘Night Time’ is available on CD from good jazz outlets and also available as a download from all of the usual online digital music platforms.