THE POWER OF LOVE…. 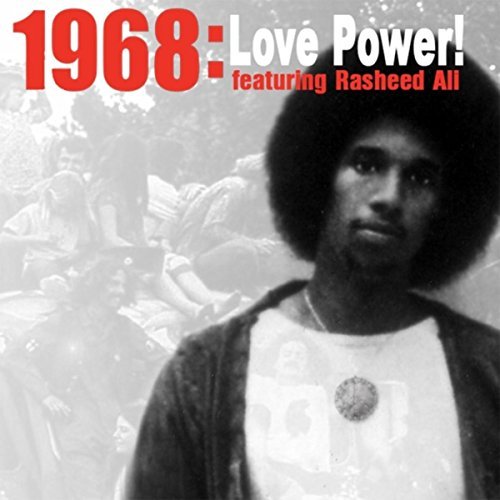 Without question two of the most powerful and talked about soul albums of the last 18 months or so have come from New York’s Rasheed Ali. First we had ‘1968 Soul Power’ – an uncompromising exploration of issues that affected Afro-Americans in the late 60s/early 70s. The focus was, as the title suggests, 1968 – a year that saw the emergence the Black Panthers, increased Civil Rights agitation, Klu Klux Klan retaliation, plenty of urban unrest and the dragging on of the Vietnam War. Sadly, of course, it was also, the year when Martin Luther King was tragically assassinated at the Lorraine Motel in Memphis.

That album was followed by ‘1968: Black Power’. This time there was still a message in the music… but the themes were more personal – roots, heritage and freeing your mind amongst them.

We were told that ‘1968: Black Power’ was the second part of a trilogy and, ever a man of his word, Rasheed Ali has just delivered that all-important third instalment…. ‘1968: Love Power’, and the complex 19 tracker is every bit as crucial and powerful as the first two episodes.

Like parts 1 and 2, the sonic template references the dominant forces in black music in 1968 (think James Brown, Norman Whitfield, Curtis Mayfield, Sly Stone and more). As ever Rasheed plays most of the instruments himself (with a little assistance from brass players Emile Martinez and Ron Taylor) and it’s testament to the depth of his commitment that what he achieves isn’t pastiche; it’s authentic and, I guess, that authenticity makes the message in the music that much more relevant.

And what of the message in ‘1968: Love Power’? This time around, Rasheed ploughs an even more personal furrow with several of the songs highlighting the role of the women in his life – none more important than his mother. She’s the focus of ‘On Her Own’; a strong single mother doing her very best for her offspring. ‘I Wonder Why’ ( a”true story” we’re told) relates the tale of a “strong” female friend who takes her own life. Then there’s ‘Hypnotised’ (“another true story”) that touches on domestic abuse and control,

Lighter tales come on stuff like ‘Groovy’ and ‘Sunshine In California’; both touch on the alternative culture, sexual freedom, self exploration and that culture’s determination no to get too hung up on issues that restrict and inhibit “self”.

By now you’ve probably guessed that the third part of Rasheed Ali’s 1968 trilogy is, like the first two, no easy listen. It’s not meant to be. It’s meant to provoke. to disturb, to question…. it does all that and much more.