THE POWER OF ANGELS…. 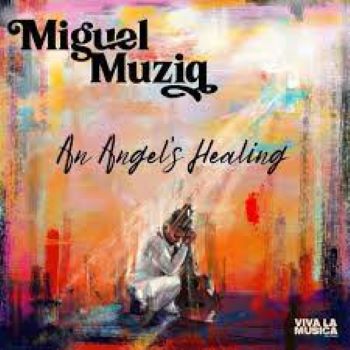 MIGUEL MUZIQ is the professional, working name of Latin-jazz guitarist Michael Panteli. Of Cypriot heritage, his work often melds mainstream Latin flavours with sounds from the wider Mediterranean area – most notably Greece. Hear his take on the genre via Miguel’s newest album ‘An Angel’s Healing’.

The 14-track album, we’re told, was born out of tragic circumstances. It seems Miguel and his partner lost an unborn child,  and his coping mechanism was to create music. He says that the album is his process of loss and reconciliation. In that context, then, the most poignant track is ‘To Angel Star, Love Papa’. It’s a gentle, building tune (think Earl Klugh) which fuses the sounds mentioned above.

Given the circumstances that created this album, much of the music is surprisingly optimistic and upbeat – like ‘Havana To Cyprus’, ‘Salsa Numero Uno’ and ‘El Carnival’. Those titles tell you what to expect. The most surprising cut is ‘Frith Street’. This is a jaunty homage to Soho and, more specifically, Ronnie Scott’s famed club. Keyon Harold’s trumpet is a delight here adding a 50s/60s black and white movie feel to proceedings.