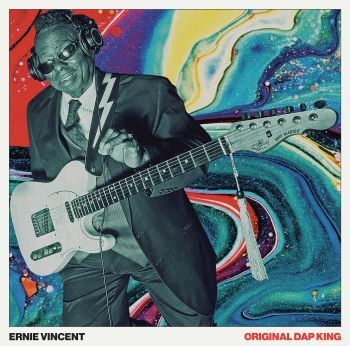 ‘Original Dap King’ is the title of the  new album from blues and soul veteran ERNIE VINCENT.  Ernie’s not that well known in the mainstream but he’s been a fixture on the New Orleans music scene for many years and he has quite a CV. He’s been making music since the 70s and with his band, The Top Notes, he’s  worked with  people like King Floyd, Ernie K-Doe, Rufus Thomas, ZZ Hill, Solomon Burke, and just about every popular R&B act that came through New Orleans. Way back in 1972 Ernie and the band made what was to become their most  famous record – the ultra-funky ‘Dap Walk’ , a cut that was  to inspire the naming of a famous record label!

With, some justification Ernie can call himself ‘The Original Dap King’, hence the title of the upcoming LP. The 10  tracker’s release has been flagged up by a series of singles, ‘Possession’, ‘Mr Good Daddy’  and most recently ‘Midnight Rendezvous’ All three were/are gritty, organic and rough-hewn. Ernie offered world weary vocals and biting, bluesy guitar work and there’s plenty more on the album.

The album’s most ambitious cut is the intriguing six minutes plus cover of metal band Neurosis’s  ‘Black’ which is countered by the very short ‘Blues Filler’ which is just that, making a clever juxtaposition of styles. Then, for more variety, the closing track, ‘Early Times’, is a proper old school R&B throwback while soul fans will find most to connect with on the aforementioned ‘Midnight Rendezvous’. This is brash and brassy with a femme  chorus and harks back to the sounds of people like Bobby Bland and ZZ Hill. ‘Guilty As Funk’ has plenty to commend itself too particularly the brass work!

‘Original Dap King’ was recorded back in 2021 at Dial Back Sound in Water Valley, Mississippi with Bronson Tew on drums and Matt Patton on bass. The trio were augmented by Jimbo Mathus on keys and the  Squirrel Nut Zippers’ horns and strings. Taylor Hollingsworth added  some extra guitar, and Schaefer Llana with AJ Haynes were on the backing vocals. Between them they cook up some “for real” old school blues and R&B.