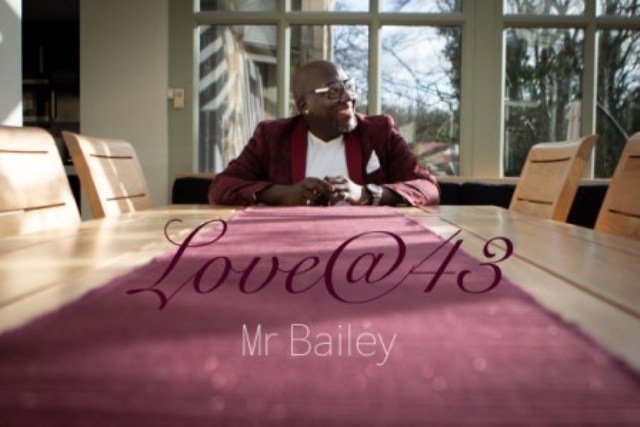 Jason Lee Bailey is a soul and gospel muso from Sheffield- yes, up there in Yorkshire. He works under the intriguing name MR BAILEY and he’s just launched his album ‘Love @ 43’. He tells us that he grew up listening to modern gospel (people like Andre Crouch, Jesse Dixon, The Clark Sisters and The Winans,) but as he got older his tastes became more secular. He cites people like Donny Hathaway, Stevie Wonder, Sam Cooke, Eric Benet, Kim Burrell, Boyz 2 Men and Jodeci as heroes/influences.

Mr B began his pro music odyssey as a backing singer – he’s sung behind the likes of West Life (‘Hey Whatever’), Alexandra Burke (‘Hallelujah’), Leona Lewis (‘A Moment Like This’), Lamar (‘Time To Grow’ & ‘Lullaby’), Texas, Baby Spice, Andrea Bocelli and Gareth Gates. In 2018 he struck out on his own with his self-penned set ‘Open’ which kind of slipped under the radar. Hopefully the intriguingly titled ‘Love @ 43’ will enjoy a different trajectory… it sure deserves to; it’s an excellent, carefully crafted, lavishly produced modern soul set that though totally contemporary, pays homage to some of those who Jason Lee counts as influences.

The overriding flavour of the 11 tracker is the sound of neo-soul with most of the cuts being tasteful, solid, mid-tempo soul grooves. Amongst the highlights is a sweet ballad, ‘I Really Don’t Think That’ that kind of combines the best of the Philly soul groups with the Boyz II Men sound. And it’s the harmonies throughout the album that offer the sweetest attraction. Check out the simple, ‘I Love You’ to hear what I mean. Yes, the title’s not particularly original but the treatment is but if you want something a little heavier there’s the sinister ‘Against The Wall’ and the a-cappella ‘Chains’ which harks back to Mr Bailey’s gospel roots.

For something completely different there’s a “bonus track” – ‘Sunny Day’ – as “up” and optimistic as the title suggests. It the LP’s tightest (sedate and sophisticated) dance groove with huge potential as a floor filler. It comes hugely recommended –as does the whole album. The greatest compliment I can give is that listening to it “blind” you’d be forgiven for thinking it’s an American recording, the sort of thing that Rahsaan Patterson or the aforementioned Eric Benet might have come up with. Out now.