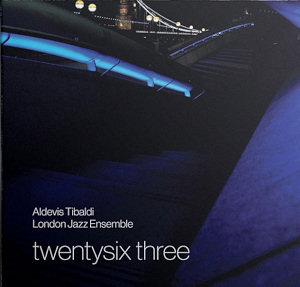 ‘TwentySix Three’ is the new album from jazz saxophonist, producer and arranger ALDEVIS TIBALDI. Tibaldi is an Italian jazzer who was trained in the classical tradition at the Tartini Conservatoire but in the 80s he began his jazz odyssey.

He says that on ‘TwentySix Three’ his aim was “to play on the tension between structure and impulse and thereby to ignite the music with individual, improvisational flare”.

You can judge for yourself when the 12 track, long player wins release on March 25th on Galetone Records. The album consists of 8 originals tunes (including the title track) and four covers – Charles Mingus’ ‘Weird Nightmare’, Duke Ellington’s’ ‘Black And Tan Fantasy’, Theolonius Monk’s ‘We See’ and Lelio Luttazzi’s ‘Mi Place’ – that last one a tribute to the Italian jazz pioneer.

On the album, Tibaldi is supported by John Eacott (trumpet and flugelhorn), Paul Taylor (trombone), Liam Dunachie (piano), Richard Sadler (double bass) and Chris Gale (drums), and for those who like to know these things the set was recorded live and in one take using analogue equipment.