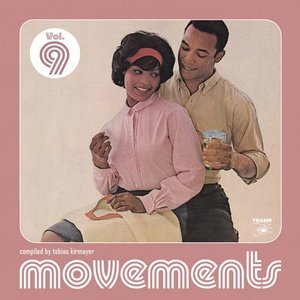 Germany’s TRAMP RECORDS get into the New Year with the ninth instalment in their always excellent ‘MOVEMENT’ series for which the motivation is to dig out the ultra rare, the esoteric and the downright obscure. To date the ‘Movement’ series has unearthed over 100 unknown soul, funk and jazz tracks and this new edition carries on the tradition with a glorious panache and a welcome disdain for the fashionable.

To understand what it’s all about grab a listen to a cover of ‘Harlem Shuffle’ by a band called Hot Cakes. You’ve probably heard dozens of versions of this song but I guarantee that you’ve never heard it like this… a kind of Spanish Harlem Shuffle with Fatback Band overtones and the odd crazy harmony …wonderful stuff! Another interesting cover is Dario and the Infernos’ take on Oscar Brown’s ‘Brother Where Are You’ while Chick Willis’ ‘Sometimes Soon’ gives James Brown’s ‘It’s A Man World’ a real run for its money.

As ever with Tramp there’s plenty of fab rare soul and funk here and with the label celebrating its 40th anniversary this year, I’m sure we can expect much, much more!

By the by, the first 400 LPs of this album come with a bonus 7″ single of Melo Madnezz’s ‘What You Getting High On’ – a mad, off every wall Northern flavour!