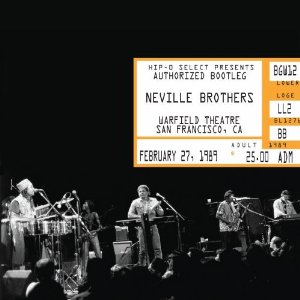 New Orleans wonderful NEVILLE BROTHERS officially came together in the 70s. Before then AARON was a solo performer (remember his classic ‘Tell It Like It Is’?), ART and CYRIL were at the core of the METERS and CHARLES was an in-demand sax man. They eventually got round to recording as a unit in 1978, but didn’t really break through till 1989’s ‘Yellow Moon’.

Just prior to that release the foursome played San Francisco’s Warfield Theatre and, remarkably, the show was recorded to be issued years later as a bootleg. Hip-O Select – through a deal with A&M – have just released the set (officially) and it’s a perfect little time capsule. The double CD offers a generous helping of New Orleans classics – and, of course, ‘Yellow Moon’, along with a mighty Rock N Roll medley which the boys performed as an encore. The album is out now but in a limited edition.