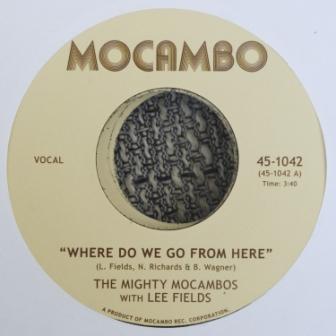 German Funk outfit THE MIGHTY MOCAMBOS are doing good business with their latest (and third) album, ‘Showdown’… but to add a little intrigue, they’ve just issued a new single – a searing old school ballad that doesn’t feature on the long player.

Tune in question is the passionate ‘Where Do We Go From Here’ which features a proper soul vocal from veteran LEE FIELDS. The cut is a wee bit different from the usual Mocambos’ funky grind but if that’s your bag, don’t despair… the B side to the ballad has the band back on familiar territory. ‘B Boy Suite In B Flat Minor’ is a pacey mash up of two of the album cuts, ‘Locked And Loaded’ and ‘The Showdown’.

Released on Legere Recordings, a diligent internet search will give you access to the tunes!