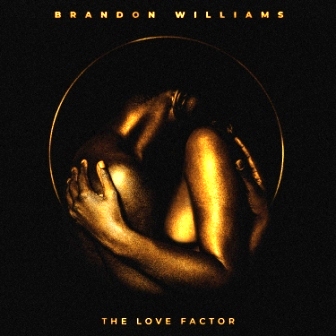 Never mind the X Factor… right now the sophisticated soul crowd are all over ‘The Love Factor’ from Detroit-bred Brandon Williams. The 37 year old started his career when he was just 12 with his unique drumming style and he was soon taken under the wing of Michael J. Powell. From there he went on to perform, engineer, MD, arrange and produce for all kinds of people.

In 2014 he made his own solo debut with album entitled ‘XII’ featuring Robert Glasper, Jean Baylor (formerly of Zhane’), Frank McComb, Nicholas Payton, Choklate and the Detroit Symphony Orchestra. You can see from that that Williams’s works like a musical architect, using other peoples’ talents to flesh out his ideas and that’s the way he operates on his latest collection, ‘The Love Factor’.

Helping out on the 13 tracker are people like Brian McKnight Jr., Alex Isley (yes, of the Isley clan), Alicia Sanders and Eric Roberson who fronts ‘Don’t Give Up On Love’ which was the album’s leadoff single, making decent waves on the US steppers’ scene. There are a couple of cuts that feature welcome input from George Duke. Williams worked extensively with Duke before his unfortunate passing, so good to hear the maestro again.

Another guest “maestro” is bassist Marcus Miller who brings his distinct bass lines to the album’s big cover – a respectful version of Ivan Lins’ ‘Love Dance’ which underlines the overriding  quiet storm flavour of the album. Marvin Gaye fans will enjoy ‘In Their Shoes’ – a cut stuffed with “Gaye-isms” and a wonderful, lithe vocal from Matt Cusson.

It’s good to know that albums like this are still being made… probably not a commercial success, more a work of love, but it deserves a hearing, especially if you were a fan of those great Norman Connors albums back in the day!