THE IMPRESSIONS – FORTHCOMING UK DATES AND A NEW ALBUM DUE! 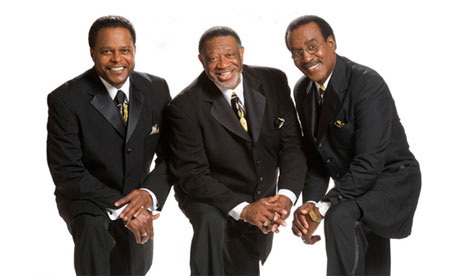 The iconic and profoundly influential Chicago vocal group, THE IMPRESSIONS, have announced a three-concert trip to the UK in July. The trio – whose founder members included Jerry Butler and Curtis Mayfield – now comprise original member Sam Gooden alongside the long-serving Fred Cash and Reggie Torian. They will be performing at the VINTAGE FESTIVAL at Bourton House in Northamptonshire on Friday July 13th (the bill includes Betty Wright, Chic, Lonnie Liston Smith, Sergio Mendes, Aloe Blacc and Alice Russell) followed by two nights at London’s JAZZ CAFÉ on the Saturday 14th and Sunday 15th.

Perhaps more significantly, the trio are in the midst of recording a new – and as yet untitled – album, their first since 1981. They’re recording it with the Dap-Kings for New York’s Daptone Records. Says the group’s manager, DJ Pari (who SJF readers might recall from his work with the Soul Power organisation which promoted Marva Whitney, Gwen McCrae, Leroy Hutson, and RAMP): “The new Impressions’ album will sound all the way like their ABC material from the mid-1960s. The new songs have Johnny Pate written all over them. It’s gonna be a collaboration that will blow people’s mind.”

Look out for an Impressions’ interview at SJF nearer the time of the legendary group’s UK sojourn.