THE HUNTER GETS CAPTURED …. 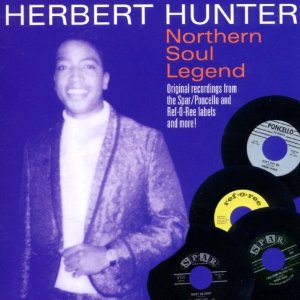 HERBERT HUNTER is a name known to just a select few soul collectors… and most of them are of the Northern persuasion. HEBERT’S ‘I Was Born To Love You’ was a big favourite on the scene – especially at Wigan’s famed Casino. But Mr. HUNTER has a lot more to offer than that and his career trajectory is a remarkable one – indeed one that stands retelling.

HERBERT HUNTER came into the music business in a most unusual way. In 1960 he was hired by Nashville music biz entrepreneur TED JARRETT to work as valet and chauffeur for GENE ALLISON who has scored a big hit with ‘You Can Make It If You Try’. ALISON, however, was way too fond of drinking and became very unreliable; so much so that the chauffeur (who had the wonderful ability to mimic) often ended up appearing on stage as ALISON – usually to rave reviews. JARRETT knew he had a talent on his hands and signed young HERB to ALAN BUBIS’ Nashville label, Spar, where he recorded original material under his own name and, maybe more interestingly, cut dozens of covers of pop and soul hits under a variety of aliases like LEROY JONES and BOB JOHNSON. The idea of the covers was to sell them on to cheap stores across the south where the customers wanted the song – and not necessarily the star name singer.

In 1962 TED JARRETT formed his own label – Poncello, and HERBERT HUNTER continued to record for him, working most notably with JIMI HENDRIX’S mentor JOHNNY JONES. From there he moved to Ref-O-Re Records then onto T-Jaye before he cut some sides for FRED JAMES’ Bluesland set up in the 90s. HUNTER never scored a hit and despite performing in Europe as part of the Nashville Soul Review, he’s still largely unknown. In an attempt to win a late reprieve for the man’s reputation Super Bird Records have just issued a pair of remarkable albums on HERB – ‘Northern Soul Legend’ and ‘The Rockin’ Spar Masters’. The former is essentially a retrospective of the man’s solo recordings under his own name while the latter is a collection of those inspired covers and features remarkably authentic versions of songs like ‘Bring It On Home To Me’ and ‘Your Cheatin’ Heart’ alongside a whole raft of twist songs. Both come recommended for any serious student of soul history.