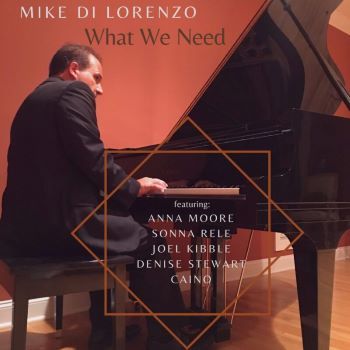 Earlier this year New York-based keyboardist and music producer MIKE DI LORENZO released a well-received album, ‘What We Need’. What was intriguing for an album by a pianist, was the fact that every track was a vocal. The songs included a cover of Loleatta Holloway’s ‘Runaway’, the MOR mainstay ‘Girl Talk’, a version of ‘Time After Time’ while maybe the LP’s biggest surprises are covers of Charlie Puth and Selena Gomez’s ‘We Don’t Talk Anymore’ and DJ Snake and Justin Bieber’s ‘Let Me Love You’. Amongst the vocalists helping Mike out were people like R&B singer/songwriter Anna Moore, the UK’s  Sonna Rele, Joel Kibble of the acapella group Take 6, rapper CaiNo and jazz/soul singer Denise Stewart.

Ms Stewart fronts an imaginative cover of ‘Guess Who I Saw Today’  (a song most associated with Nancy Wilson). That particular track has just won release as a single and if classy, lounge jazz is your thing, then it’s well worth investigating! Denise Stewart handles the vocal with assurance, Frank Elmo offers a sensuous sax break while Di Lorenzo’s keys are a delight – betraying his years of experience!