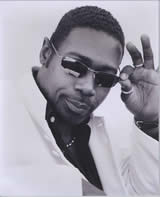 Born in the Bronx, raised in Detroit and now working out of Atlanta, DORION JAMES is steadily making a name for himself as a “proper” old school soul singer. Influenced by people like SAM COOKE, PRINCE, MARVIN GAYE and MAXWELL, his first album ‘Change The Game’ was critically acclaimed and a decent seller in and around Atlanta.

The man’s currently putting the finishing touches to his second album – bravely titled ‘The Greatest’. Only time will tell if it merits that particular adjective but the first two tracks released from the album show real promise. Both ‘When A Man’s In Love’ and ‘Baby Don’t Be Mad At Me’ sit on the cusp of contemporary R&B and old school soul. They’re tight, mid-tempo shufflers and though never in your face there’s no doubting the sincerity in DORION’S soulful vocals.

You can investigate via the usual internet outlets or go to www.dorionjames.com