THE GOSPEL ACCORDING TO JKABEL… 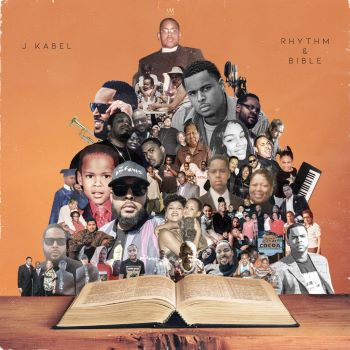 JKABEL is the working name of gospel/devotional singer Jared Kabel Holloway. Jared was originally from Florida where he began his musical odyssey learning piano but a career in acting beckoned. After stage school he went on the road with theatrical performances but after relocating to Minnesota he returned to music, writing and recording. He released his first single in 2016 and now has five albums under his belt including this one, his latest, ‘Rhythm & Bible’. The album is already making big waves on soul radio on both sides of the Atlantic and winning plenty of plaudits from serious soul tastemakers. Now, I’d hesitate to call myself a “tastemaker” but, for what it’s worth, I’d like to add my praise and recommendations to those already out there.

First, though, we need to say that ‘Rhythm & Bible’ is essentially a gospel album (the clue’s in the title!), but don’t let that put you off. Proper soul fans, even non-believers, understand gospel; they acknowledge the link between soul and gospel and appreciate that the former would not exist without the latter. And yes, this LP is peppered with gospel references and biblical quotes, but many of the delivered spiritual messages are equally relevant to the secular life while the sound is the sound of contemporary soul – making those important messages that bit more impactful.

Second, we need to say that JKabel has a proper old school soul voice  – a rich, emotive baritone that some US commentators have already compared to people like Luther, Teddy P and Will Downing. Like those masters, Jared’s voice can go from tender to fierce within the space of a few bars!

Thirdly, we need to add that ‘Rhythm & Bible’ is a long album. There are 16 tracks and it clocks in at just over 50 minutes, but it never loses focus. Given the singer’s faith and commitment to his craft, there are no fillers. Each track  has  been carefully conceived and constricted with love – and it shows.

That said, you can probably guess that we can heartily recommend this album and it would be churlish to pick highlights, but here’s a couple to maybe whet your appetites. ‘Believe’ is a strong cut by any yard stick. It opens with a quote from Psalm 23 before developing into a simple  and soulful expression of commitment. ‘Keeper Of My Soul’ offers more of the same while ‘New Friends’ (maybe the next single) is beguiling.

2022 has been a vintage year for soul albums… Mica Miller, Tyra Levone, Laura Rain, Mamas Gun  and Blue Soul Ten have all delivered and now we can add to that list the name of JKabel. Once again thanks to “Soul Strutter” Mark Turner for unearthing this one. Find out more @ https://soulstrutter.blogspot.com/