THE GOOD, THE BAD AND BETTE SMITH 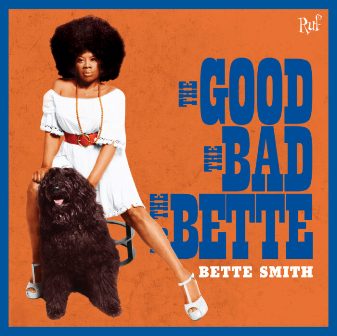 Fans of the feistier, rockier sort of soul music will know about Brooklyn born singer/songwriter BETTE SMITH. Raised in a God-fearing, gospel-singing family, her ‘Jetlagger’ album turned quite a few heads with its take no prisoners version of the classic Southern soul genre.

Right now Ms Smith is gearing up to release the follow up… ‘The Good, The Bad And The Bette’. It’s been produced by Matt Patton of the Drive-by Truckers and is due September 28th on German label, Ruf Records. Previews reveal that the 10 tracker takes off where ‘Jetlagger’ ended – that’s to say it’s a daring, brash amalgam of soul, gospel and raw rock topped by Ms Smith’s fierce, tough vocals that might recall Bette Davis, Betty Wright or Tina Turner in her prime.

There’s no explanation, but it seems that singer and producer have a penchant for spaghetti westerns. There’s the album titlefor a start; then there’s the opening track – ‘Fistful Of Dollars’, which kind of sets out the template for what’s to follow… brash, funky, rocky soul that surges and soars. In truth a lot that follows will probably be too rocky for the real soul crowd. Tunes like ‘I’m A Sinner’ and ‘I Felt It Too’ seem aimed at the stadium rock crowd, but when Bette and Patton tone things down the result is some satisfying southern soul with a modern twist. Try the moody ballad ‘Whistle Stop’ (shades of Macy Gray), the Hi-flavoured ‘Signs And Wonders’ or the country-tinged ‘Song For A Friend’.

BETTE SMITH: ‘The Good, The Bad And The Bette’ out September 28th.