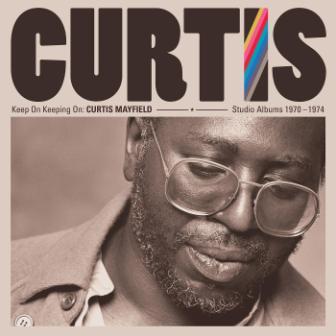 Hard to believe, but 2019 marks the 50th anniversary of the start of CURTIS MAYFIELD’S solo career. I can still remember vividly when he announced he was leaving the Impressions – the group of choice for soul connoisseurs everywhere. Many Imps fans were heartbroken… how could he break up soul’s premier vocal group! But the man was determined to move onwards and upwards and as it turned out Fred and Sam continued to make great music with the different lead singers who came after Curtis.

To celebrate this landmark soul anniversary, Rhino Records will be releasing newly remastered versions of Curtis’ first four solo studio albums under the collective title ‘Keep On Keeping On’. The long players are, of course, ‘Curtis’ (1970), ‘Roots’ (1971), ‘Back to the World’ (1973) and ‘Sweet Exorcist’ (1974). Between them they offer key Mayfield cuts – monumental tunes like ‘Move On Up’, ‘(Don’t Worry) If There’s A Hell Below, We’re All Going To Go’, ‘ We Got To Have Peace’ and ‘If I Were Only A Child Again.’

The collection is being released with the full cooperation of the Mayfield estate. His wife Altheida says: “Curtis Mayfield was my husband and we were a team, so it’s an especially happy occasion to see these songs featured in a new boxed set on what would be Curtis’ 50th anniversary as a solo artist. He passed 20 years ago this year and the family has and continues to lovingly support and share his musical legacy with the world.”

Mayfield purists will no doubt point out that in the period, he did release three more long players – his famous “live” album, the groundbreaking ‘Superfly’ soundtrack and a live Chicago celebration, but the four LPs in this set represent his bona fide “solo, studio work”. The package comes on either four CDs or four LPs. It can be downloaded digitally and will also be available via streaming services. While supplies last, all orders placed via Rhino will include a 12×12 print as an exclusive gift with purchase. Expect a full review here very soon.