THE GENTLE GENIUS; IN TRIBUTE 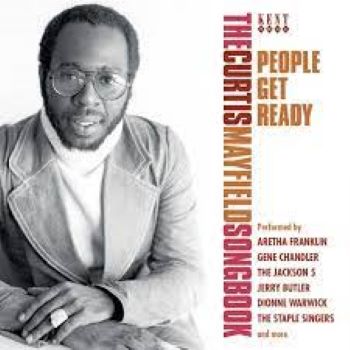 At last! The team at Ace/Kent have finally gotten round to adding CURTIS MAYFIELD to their roster of “Songwriter tribute” albums. The compilation series began some years ago, spotlighting garlanded writers by anthologising some of their best songs and offering them in a variety of versions by all sorts of performers. Maybe it’s taken them so long to get around to the “Gentle Genius” because his catalogue is so large and  impressive and the compilers couldn’t agree as to what to include! Whatever, better late than never – and what we have here on ‘PEOPLE GET READY’ is an impressive look at Mayfield’s work  testifying to his status as a premier songsmith.

The 24 track album begins with the Impressions’ ‘Gypsy Woman’. From 1962, a classic “story” song, it was Curtis’ first major success as a writer. The album ends with John Legend and the Roots’ 2010 version of ‘Hard Times’. The song, most famously associated with Baby Huey, is one of Curtis’ famed socio-political commentaries and still sounds relevant – maybe more so than when it was written in 1968! In between those poles, ‘People Get Ready’ offers more “story” songs (like ‘Queen Majesty’ – here in a reggae version from the Techniques) and more social comment (try Curtis’ own version of ‘Keep On Keeping On’) but, importantly, there’s plenty of the man’s romantic songs – songs that speak eloquently about the ups and downs of love and relationships.

Many of the featured artists are directly linked to Mayfield and his Chicago roots. So enjoy Major Lance’s ‘Um, Um, Um’, Gene Chandler’s ‘Rainbow’, Jerry Butler’s ‘I’ve Been Trying’, Walter Jackson’s ‘It’s All Over’ and many more. Some of the selections ae from artists who just knew a great song when they heard one – like the Miracles with ‘The Monkey Time’, Dionne Warwick with ‘People Get Ready’, the Main Ingredient with ‘I’m So Proud’ and Isaac Hayes with ‘Need To Belong’. Some of the selections – like Barbara Mason’s ‘Give Me Your Love’, Gladys Knight and the Pips’ ‘The Makings Of You’  and Aretha’s ‘Look into Your Heart’ are Curtis productions. Maybe the biggest surprise here  is the Jackson 5’s version of ‘Man’s Temptation’ – such an adult song for such a young group (it was recorded in 1970); they carry it off wonderfully!

The album compliers also touch on the massive influence Curtis (and the Impressions) had on Jamaican music. We’ve mentioned the Techniques but here there’s also a lovely Jamaican take on ‘That’s What Love Will Do’ from the Gaylads.

Other featured artist are – Jan Bradley, the Orlons, Freddie Scott, Patti Jo, the Staple Singers, Keni Burke and En Vogue; all offering evidence of Mayfield’s huge prowess – a “genius” indeed! No how about a second volume!