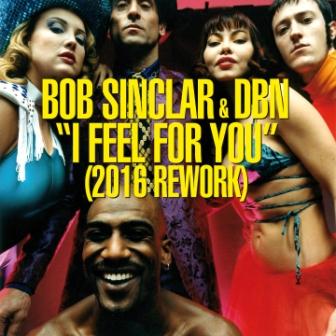 BOB SINCLAR is Soulful House’s favourite French man and his ‘I Feel For You’ is one of his most esteemed tracks. Now Monsieur Bob has allowed German trio DBN to remix the song and the result is an edgy, bass heavy rework that is already winning plays all over the place.

Bob and DBN go back a few years to a time when they remixed his ‘What I Want’ and he was so impressed that he went on to allow them to re-tool ‘I Feel For You’. Patrick Kroepels (of DBN) says: “The track is one of our absolute favourite house classics, which had a huge influence on our music. It has been an honour to work together with such a legend on such an influential club classic!”

‘I Feel For You (2106 rework)’ is released on Bob Sinclar’s Yellow Productions label and is available via Traxsource for a 2-week exclusive period before being made available to purchase at all digital retailers.