THE DELLS Vs THE DRAMATICS…. 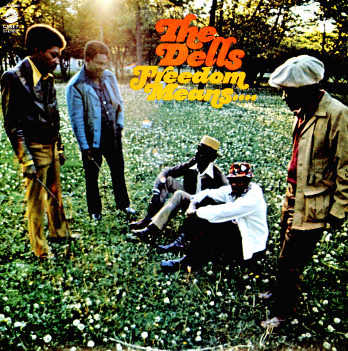 THE DELLS and THE DRAMATICS are two of soul’s greatest groups…. never massive in the mainstream but revered and respected by soul collectors and connoisseurs who cherish each and every one of their recordings. Way back in 1974 the two outfits even collaborated on an album which is now hugely collectable.

Sadly that album is hard to find but Caroline International (in association with Soul Music Records) have just reissued new albums on both the Dells and the Dramatics so we can all continue to enjoy two classic soul groups in their pomp!

The Dells’ reissue is their wonderful 1974 Cadet album, ‘Freedom Means’. Produced by Charles Stepney, the ten tracker wins its first ever full reissue here – surprising since the album is one of the Chicago quintet’s most cohesive and rewarding collections.

Most of the album’s songs come from the Jerry Butler Writers Workshop pairing of Terry Callier and Larry Wade and they’re the pair who provide the album’s real gem… the searing ‘The Love We Had Stays On My Mind’, a cut that perfectly sums of the art, craft and passion of the mighty Dells. Their ‘Rather Be With You’ is another standout while the group also offer great versions of Bread’s ‘Make It With You’, Burt Bacharach’s ‘One Less Bell To Answer’, Jacques Brel’s ‘If You Go Away’ and the theme to the ‘Love Story’ movie – those last two forming a medley.

The Dells’ ‘Freedom Means’ is a huge album; the Dramatics’ reissue, ‘Shake It Well’ is maybe les significant, but given the class of the Dramatics, it’s still a more than worthwhile reissue. Originally released in 1977, ‘Shake It Well’ was the Dramatics’ fourth album for ABC Records and the title track was producer Don Davis’ attempt to recreate the magic he’d crafted for Johnnie Taylor on ‘Disco Lady’. The tune ( a sparse, gritty , bass-heavy groove) gave the Dramatics a top 5 R&B hit but its tough sound is not representative of the rest of the album.

On cuts like ‘You Make The Music’, ‘Come inside’, ‘My Ship Won’t Sail Without You’, ‘Spaced Out Over You’ and ‘That Heaven Kind Of Feeling’ the sound is smooth yet still soulful and laced with the Dramatics’ tight harmonies and signature switching of lead vocals.

Both albums are out now.