THE BLUE NOTES: THE DOO-WOP YEARS. 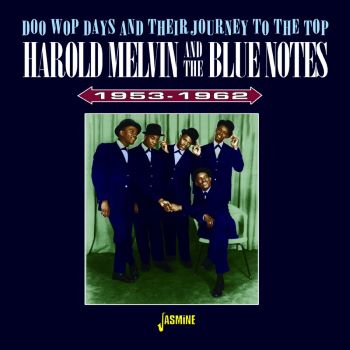 HAROLD MELVIN and the BLUE NOTES dominated the soul world in the mid 70s. Furnished with songs and productions from the Gamble/Huff factory and fronted by Teddy Pendergrass, they re-defined the sound of the soul harmony group, garnering hit after hit and award and after award. Like many top vocal groups, though, the Blue Notes had a long history that predates their glory years and a new 24 track compilation from Jasmine Records will allow you to check out the Blue Notes pre-Philly International era.

No two soul histories can agree about when the Blue Notes started out – a problem accentuated by the fact that were a number of vocal groups using that moniker and indeed even the compilers of ‘Doo Wop Days And Their Journey To The Top’ can’t be absolutely sure that the first four tracks on the collection (recorded between 1953-1955) are actually the band that Melvin eventually led. What is agreed is that in 1954 Harold Melvin joined Franklin Peaker, Bernard Williams, Roosevelt Brodie and Jesse Gillis, Jr (collectively once known as the Charlemagnes) and formed his Blue Notes and for reasons never best explained put his name front out even though he wasn’t the lead singer.

The group recorded for a number of labels like Josie and Val-Ue in the then fashionable doo wop style and in a crowded marketplace real success eluded them. Their biggest hit was 1960’s ‘My Hero’, a sweet, harmony-laden ballad that was an R&B top 10 hit and reached no. 78 on the Billboard Pop chart. The album boasts plenty more of the same, precise and sweet balladeering alongside novelty R&R and R&B number like ‘Hey Doc’ while towards the end of this chronologically ordered set you just hear traces of embryonic soul as on the Jerry Butler/Curtis Mayfield song, ‘Pucker Your Lips’ and while it’s March why not enjoy couple of Christmas songs… ‘Winter Wonderland’ and ‘O Holy Nite’!!!

‘Doo Wop Days And Their Journey To The Top’ covers the period 1953-1962 and it comes with a caveat. The Blue Notes line up was fairly fluid and as singers came and went some formed rival Blue Notes and maybe not all the tracks here are from the Melvin team.