THE BARE BONES OF THE MATTER 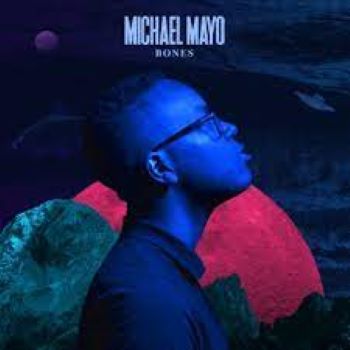 When an album is awarded the accolade of “album of the week” on Jazz F M, it deserves attention. So it was that we sought out ‘Bones’ by MICHAEL MAYO. To our shame we knew little about Mr. M but soon discovered he has a remarkable music pedigree.  His father is Scot Mayo, sometime sax player with Earth, Wind and Fire and now MD for Sergio Mendes while his mother, Valerie Pinkston, is an in-demand session singer who’s worked with people like Diana Ross, Beyoncé, Luther Vandross, Ray Charles, Whitney Houston and (whisper it) Morrissey! Born in L.A., Michael now lives in New York and was only the third vocalist to be accepted into the acclaimed Thelonious Monk Institute of Jazz Performance, learning from Wayne Shorter, Herbie Hancock, and Luciana Souza.

‘Bones’ is the 28 year old singer’s debut album and was recorded just prior to the pandemic lockdowns. The tracks were cut live with his band — keyboardist Andrew Freedman, bassist Nick Campbell and drummer Robin Baytas, all of whom he’s played with since high school or college. Producer is Eli Wolf, a veteran Grammy®-winning producer of albums by Al Green, Norah Jones and The Roots. Between them, that team has created a remarkable piece of work with the 11 tracker that is ‘Bones’. Amongst the album’s many charms is the fact that the collection defies categorization. It’s Michael’s forté to merge aspects of different musical genres or ignoring them when he chooses. “I used to be pretty rigid when it came to genres. I was, like, ‘Jazz and R&B are mutually exclusive, and you must approach them like two entirely different things.’ But I learned that things that seem like they are entirely unrelated usually do have a common thread. Today, whether I’m singing my own music or other people’s, I know that the only real common thread I care about is truth and authenticity.”

So, what is the sound of ‘Bones’? Well, all kinds of everything… Jazz, Neo-Soul, R&B, gospel and West Coast pop à la Beach Boys. In places Mayo’s music is experimental and improvisational. Some of the tracks have over 250 looped and layered vocal lead and choral harmony parts. Hence my mention of latter career Beach Boys… think Brian Wilson’s experimentation during the ‘Smile’ era. Maybe ‘Bones’ is what might happen if Brian Wilson did jazz and soul! Hear those flavours all over the place  but most notably on ‘20/20’ or ‘Stolen Moments’ – a harmonic confection that suddenly goes all over the place in experimental tangents! Amongst other highlights is the opener, ‘The Way’ – a slow, neo-soul builder where the layered , wrap-around harmonies might recall a certain Marvin Gaye.

Repeated listens to ‘Bones’ afford all sort of sonic treasures. Little wonder it made “album of the week” @ Jazz FM. It’s out now on Artistry/Mack Avenue.