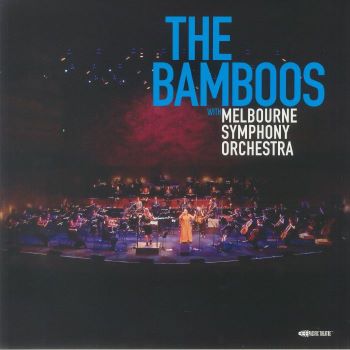 Australia’s finest, THE BAMBOOS have been in business for over 20 years and have laid down plenty of fine Antipodean funk and soul but for their latest album release, they’re offering something a little different …a live album. The release, though, is no simple recording of one of their always explosive shows; rather it was recorded at Melbourne’s iconic concert venue Hamer Hall and  the band were backed by the full fifty-piece Melbourne Symphony Orchestra and the result is astonishing.

The ten songs are taken from the Bamboos two decade career but with a full- blown symphony in tow, the familiar is reinvented! All the arrangements were crafted by the band’s trumpet player, Ross Irwin who doesn’t simply put strings behind the recorded versions but reinvents the songs adding drama, emotion and cinematic sweeps.

The band’s long time vocal collaborator Kylie Auldist features on many of the tracks with the lovely, gentle ‘I Don’t Wanna Stop’ an absolute highlight while on the cover of London Grammar’s ‘Strong’ she turns on her full soul power. Aussie rock star and actor Tim Rogers take lead vocals on the moody, ‘I Got Burned’.

Bamboos guitarist and bandleader Lance Ferguson recalls that the show “truly felt like a once-in-a-lifetime experience. Melbournians had just emerged from the city’s first major lockdown, the gift of seeing and playing live music again seemed to carry extra weight for everyone in the room. All of the raw emotion in the room, along with the incredible arrangements from our very own Ross Irwin, galvanised the band and the audience to make these shows count”.

The album’s out now via Pacific Theatre.