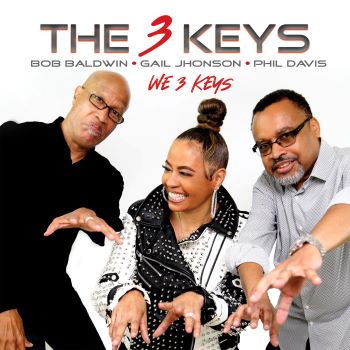 The 3 Keys are a “new” smooth jazz outfit ; in reality however, they’re not “new” at all. The trio comprise three veteran and much loved keyboardists – Bob Baldwin, Gail Jhonson and Phil Davis. Baldwin’s name will be familiar to every smooth jazz collector. He boasts an enviable catalogue and many have fond memories of his 2019 take on the music of the Beatles and his more recent work with Kathy Kosins. As well as her solo work, Ms Jhonson is known for her work with Jazz In Pink and for many years she was MD for Norman Brown. Phil Davis is maybe a little less known but the Georgia born  musician is an in-demand pianist, producer, composer, and educator who has collaborated with a wide cross-section of artists including Prince, Al Jarreau, Stanley Clarke, Jennifer Holiday, Erykah Badu, Regina Belle and Walter Beasley. What brought the threesome together musically was a deep mutual respect and a shared love for artists like George Duke Stevie Wonder and Herbie Hancock. Jhonson explains how the project began. “Phil and I were performing with Grammy-winning guitarist Norman Brown, and we met up with Bob Baldwin backstage. Naturally, I wanted a photo of the three of us together since it is rare for keyboard players to get the chance to hang out. We were joking and laughing and as we took the shot I said, ‘we should be a group!’” Baldwin adds, “The piano like all instruments is such a personal instrument.  It was cool and refreshing to see a different spin on the same instrument from all our different perspectives. This project is really to showcase the piano, which is the backbone for Contemporary and Smooth Jazz.”

Musically, then what do these three “keys” offer. Well, in short, they deliver a varied menu of moods and textures via a clever usage of keyboard sounds including Moog synths, pianos, the Fender Rhodes, organ, keyboard bass, and other various synthesizers

The album’s only cover is a six minute plus version of  the Aldir Blanc, Ivan Lins and Vitor Martins composition “Camaleão,” (you may remember Grover Washington Jr’s classic version and Dionne Warwick has also cut it). With the gentlest of Latin undertows, you can sense  the joy the trio  felt creating it. Indeed, throughout the album you can enjoy a real chemistry between the three  principals. Out now.