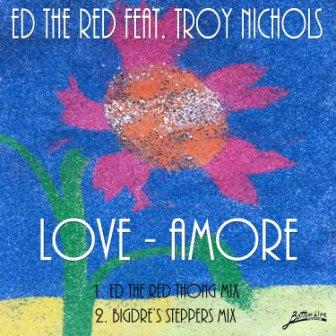 The ultra-prolific producer ED THE RED raised a few eyebrows with his last offering – ‘Love –Amore’…. a big soulful ballad, very different from his usual dance productions. With an old school vocal from Troy Nichols, people made comparisons with the work of  Isaac Hayes and Anthony White.

Mr Ed was so impressed with reaction to ‘Love –Amore’ that he’s all set to go with two new mixes that make the cut a tad more danceable. First up is the enticingly named “Thong mix” – aimed at the romantics, there’s a whiff of Big Barry White about it. Then there’s Big Dre’s “Steppers mix” which is, well, just that!

Both the new mixes are being rush released, so keep your eyes on your fave download portal! Label, by the way, is Ed’s own Bottom Line.