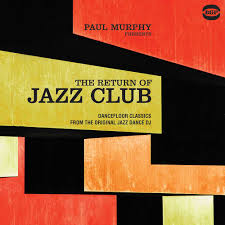 PAUL MURPHY is a cult personality on the UK jazz scene. In the 80s he was a DJ in some of London’s best jazz clubs and his nights became legendary – turning a new generation onto the music of Tubby Hayes. Dizzy Gillespie, Roland Kirk, Art Blakey, Ella Fitzgerald and many more. The UK’s current top jazz DJ, Gilles Petersen, is quick to acknowledge his debt to Murphy: “Paul Murphy found almost every jazz dance floor classic.” To consolidate his position Murphy was responsible for compiling two ‘Jazz Club’ albums which are now hugely sought after collectors’ item.

For reasons never well explained he quit the jazz scene to return in the mid 90s working with dance records…then he all but retired – to Hungary.

Modern media has allowed jazz enthusiasts to reconnect with Paul Murphy via Facebook and the people at Ace’s BGP imprint implored him to compile a new ‘Jazz Club’ album and without too much arm twisting the retired DJ agreed.

The result is ‘The Return Of Jazz Club’ – an atmospheric 15 tracker on BGP. All the tunes are taken from the back catalogues of Prestige and Riverside Records and the featured artists include Sonny Rollins, Theolonius Monk, Bennie Green, Willis Jackson, Art Farmer, Brother Jack McDuff and Mose Allison –whose ‘Parchman Farm’ (included here)) wasn’t just a big record in the 80s but also a massive influence on 60s musicians –ask a certain Georgie Fame.

PAUL MURPHY PRESENTS THE RETURN OF JAZZ CLUB is out now.