THAT WAS THE YEAR THAT WAS…. 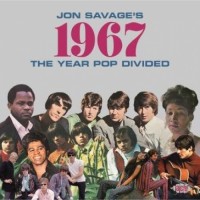 Last year musicologist/sociologist/journalist JON SAVAGE published an acclaimed history of 1966. He examined those seminal 12 months via that year’s best popular music and tried to show how it impacted (and itself was impacted) on culture politics and economics. It was hefty tome (over 650 pages) and I found it a difficult read… more university treatise than music journalism. I’ve always believed that when discussing music it’s better to let the music to do most of the talking and thankfully good old Ace Records issued a 2CD album to accompany the book and it helped put Savage’s words into context.

We’ve been told there won’t be a “1967” book any time soon but that hasn’t stopped Jon and Ace getting together again to select a bumper 48 tracks that they hope show what was important musically in 1967; “the year pop divided” as Savage describes those 12 months.

In the sleeve notes Jon describes how in 1967 revenue from albums overtook revenue from singles even though the market for 45s remained very, very strong and the tracks selected for ‘1967’ attempt to illustrate the differences between the two markets as well as touching on “the Summer of Love”, how drugs impacted on music and much, much more.

Heavy stuff again but why not just enjoy ‘1967’ as a rather superior compilation of not so obvious music… Soul wise there’s music from people like Gladys Knight, Rex Garvin, Aretha, Joe Tex, James Brown, Dyke and the Blazers and the Sandpebbles alongside classic pop from artists like The Move, The Fortunes, The Spencer Davis Group, Sonny and Cher and the Searchers. There’s also plenty of psychedelic stuff of varying quality.