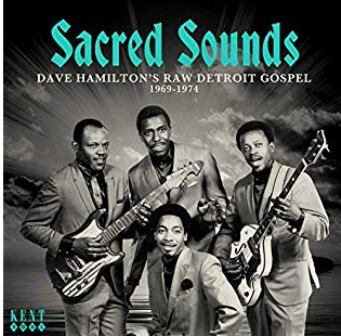 Soul collectors will be familiar with Detroit guitarist, producer and label owner DAVE HAMILTON. An in-demand session player, Dave can be heard on Motown classics like ‘My Guy’ and ‘Heatwave’ but right through the great days of the Motor City he beavered away recording countless local acts himself. He thought that what was good for Berry Gordy was good for him, so he released numerous singles on all kinds of labels and occasionally licensed some of his music to bigger labels with varying degrees of success. Dave even went on to build his own recording studio.

Naturally, soul was Dave’s forte but he also played mean jazz and funk and for a time he worked with gospel artists – a logical development since he lived right opposite the Reverend C L Franklin’s Detroit church. Over the years, Ace/Kent has reissued plenty of Hamilton’s work but now, for the first time, they offer a selection of his gospel productions.

The 24 tracker that is ‘Sacred Sounds’ offers rough and raw gospel tunes that Dave recorded between 1969 and 1974 for labels Sacred Sounds, Motor City, New Creation and Demoristic. Expect no big names here. Most of the artists only made one (maybe two recordings) that were intended for sale in local churches but that doesn’t make the music any less worthwhile. Indeed, on the contrary, you’d be hard pressed to find more convincing and impassioned soul than that offered here by artists like the Scott Singers, The Detroit Silvertones, Umble Faith and Little Stevie and the Reynolds Singers. Most of the tracks are presented in what has come to be accepted as Hamilton’s signature sound – rough and earthy, raw and honest. Smoothest offering is possibly ‘He’s All I Need’ from the wonderfully named Sensational Sunset Paraders. It’s a classic Detroit group sound – packed with real soul.

‘Sacred Sounds’ is out now and it comes complete with a full appreciative essay and loads of remarkable archive photos that enhance the message in the music.