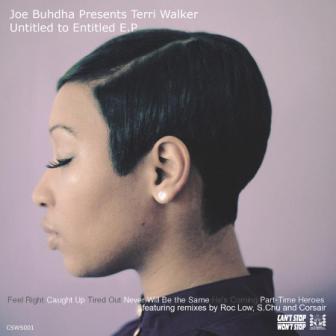 The lovely TERRI WALKER could be called the almost girl of Brit soul. She’s made some fabulous, catchy records (‘L.O.V.E.’, ‘Ching, Ching’ anybody?) but she’s never quite made the Premier League. Hopefully that’s set to change with the upcoming release of her latest album, ‘Entitled’.

Amongst the tunes on the EP are a couple of bumpy R&B beaters (‘He’s Coming’ and ‘Tired Out’) that feature that great Daptone style brass that drove a lot of Amy Winehouse’s best. Then there’s a shifty ‘Part Time Heroes’ and a loping, bassy, disco delight called ‘Feel Right’.

The more sophisticated soul crowd though should go straight to ‘Caught Up’ (a light and delicate old school dreamy ballad) and ‘Never Will Be The Same’ which evokes the best of Philly balladeering… quite lovely … and Terri’s at her soulful best on it.

Terri says: “The theme of the E.P is really me going back to my roots of my first album “Untitled”. I wanted to have a bridge linking the old to the new me (Terri Walker). The E.P has everything – Jazz, Soul, Hip Hop, just good music and good songs. It is the perfect opener to introduce everyone to my fourth studio album “Entitled”. “

The EP is a digital only release – find it via the usual portals;the discofied ‘Feel Right’,though, will be available on 12 inch via Greenmoney records