TERESA… THE COUNT AND THE DUKE 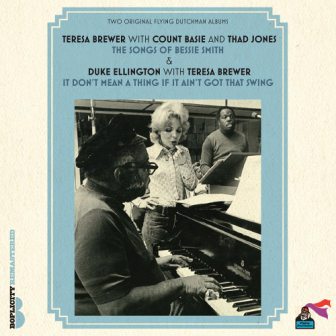 TERESA BREWER was a US pop singer who enjoyed huge success in the late 40s and through the 50s. By the 60s rock n roll, the surge of soul and something called Merseybeat put paid to her career and she quit to look after her family.

In the early 70s, though, after a divorce, she reconnected with one of her old musical mentors Bob Thiele who, by then, was running his own label group under the Flying Dutchman banner. Cutting to the chase, the pair got married and Thiele had his new wife cut two albums in the style of her early successes. With a dated sound little wonder they flopped; Thiele then decided on a dramatic switch of styles… he had the new Mrs Thiele record with the Count Basie Orchestra who’d just recorded the wonderful ‘Afrique’ album for Flying Dutchman.

Between them they cut an album of Bessie Smith songs and with classy arrangements from Thad Jones the long player was critically acclaimed. The album also won the attention of Duke Ellington who decided that he too would love to work with the ex pop vocalist and the result was an 11 tracker called ‘It Don’t Mean A Thing If It Ain’t Got Swing’. The album was a collection of Ellington tunes, including ‘Satin Doll’ and ‘Mood Indigo’ and poignantly it proved to be the Duke’s final studio recording. He died, of course, in May 1974.

Both albums have just been reissued on Ace’s Boplicity imprint as a “twofer”. ‘Teresa Brewer with Count Basie… The Songs Of Bessie Smith/Teresa Brewer with Duke Ellington… It Don’t Mean A Thing If It Ain’t Got Swing’ is out now.