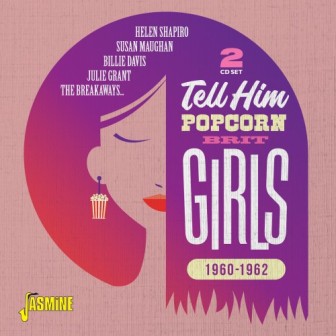 The newest compilation from budget, oldies label, Jasmine, is ‘TELL HIM’ – a snapshot of the UK pop scene on the eve of the Beatles explosion. As the subtitle (‘Popcorn Brit Girls 1960-1962’) explains, it focuses on  female singers – some already stars, most vying for fame, but none aware of what was around the corner lurking in Liverpool.

Maybe the biggest names on offer are Helen Shapiro and Petula Clark… the former something of a child star (she had her first hit aged just 14), the latter an established “name”. Dear Dusty Springfield’s in there too- as part of the Sprigfields trio singing ‘Island Of Dreams’. Other “names” from the era include Ruby Murray (her name immortalised in Cockney rhyming slang!), Lita Roza, Kathy Kirby, Marion Ryan and Alma Cogan whose ‘He Just Couldn’t Resist Her With Her Pocket Transistor’ is a great example of the novelty song popular in the 50s and early 60s.

The majority of the songs emanated from London’s Tin Pan Alley, but there are plenty of covers of US hits – notably Susan Maughan’s version of ‘Bobby’s Girl’ and the Delaine Sisters’ take on Carole King’s ‘It Might As Well Rain Until September’.

For soul collectors there’s also a goodly smattering off early soul covers like Lynn Cornell’s version of Patti Labelle and Bluebells’ ‘I Sold My Heart To The Junkman’, Billie Davis’ take on the Exciters’ ‘Tell Him’ (for which the album is named), Cherry Wainer’s Hammond-led instrumental look at Barrett Strong’s ‘Money’, Jackie Lee’s cover of the Shirelles’ ‘Will You Still Love Me Tomorrow’  and Jackie Trent with Mary Wells’ ‘I’m The One Who Loves You’ which some musicologists claim is the first UK cover of a Motown song… interesting, like the whole 2 CD, 68 track collection.