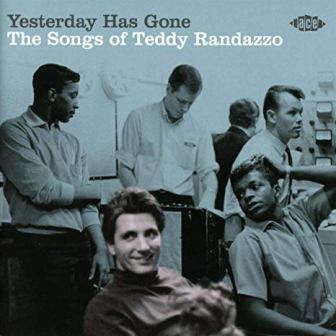 All self-respecting soul fans know about REDDY RANDAZZO. Born in Brooklyn in 1935, Alessandro Carmelo Randazzo began his music career as a singer with smooth harmony group, The Three Chuckles. In 1957 a solo career beckoned and through the late 50s and early 60s he enjoyed moderate success in the wake of artists like Bobby Darin, Fabian and Bobby Vee. He continued recording through the 60s but in 1964, when pacted to DCP Records, he started writing more and more songs and started producing other artists too and, of course, it’s as a writer/producer that Teddy is best remembered putting together a catalogue as classy and successful as those crafted by people like Burt Bacharach, Carole King et al…. and it’s 25 Randazzo masterpieces that are presented on ‘Yesterday Has Gone’ – the latest in Ace Records’ writers series.

No surprise that the collection boasts a couple of Little Anthony and the Imperials’ songs. Teddy and the group worked closely and indeed their 1964 collaboration ‘I’m On The Outside Looking In’ (included here) gave Teddy his first hit as producer. The other included Imperials’ song is their version of ‘Yesterday’s Gone’… a UK hit for Cupid’s Inspiration. ‘Better Use Your Head’ is another song always associated with Little Anthony. Here it’s offered in a tremendous version by Mel Torme, illustrating the fact that Randazzo’s songs were always considered rather superior – superior enough at any rate for “serious singers” to tackle… none more serious than a certain Frank Sinatra who, here, contributes a wonderful mournful ‘Rain In My Heart’.

Amongst the other featured are artists re the Delfoncis, the Stylistics, the Manhattans, Dionne Warwick, the Vogues and the UK’s Billy Fury. Randazzo’s ‘I’m Lost Without You’ perfectly suited the one time Mersey tug boat man’s moody image. Amongst the other highlights is the Royalettes’s superb ‘Gonna Take A Miracle’ … sadly only a modest hit but the perfect definition of the Teddy Randazzo sound.

Teddy Randazzo died at the age of 68 in 2003 but he left a tremendous legacy enjoy just part of that here!